Proximity to School and Care Facilities

Rockwool (or Roxul USA, Inc) is a Denmark based manufacturer of home and industrial insulation produced from slag and basalt. Ground has been broken for a 463,000 square foot industrial facility on 130 acres in Jefferson County, WV and is scheduled to begin 24 hour day operations in 2020.

The location of the factory is within 2 miles of 4 public schools and 2 daycare centers, housing 30% of Jefferson County’s student population.  No evaluation of the impacts of air toxic emissions on the nearby schools has been conducted. The land use assessment of the surrounding area was based on 1992 data.

Last September, this board voted to approve a PILOT (payment in lieu of taxes) based on a limited presentation that focused on the financial implications surrounding the Rockwool plant. Now, after listening to the concerns of this community and reviewing all available information, we believe more data is necessary as we assess the long-term impact of the Rockwool facility on the surrounding area. The JCS BoE is therefore asking Rockwool to bring on an independent third party to conduct a Human Health Risk Assessment.*

What is in the Air? The facility has been approved for heavy toxic emissions, with smokestacks approximately 21 stories high. Emissions are estimated at 470 tons of Volatile Organic Compounds (VOC’s) and 239 tons of nitrogen oxides per year. “A substantial body of research on the effects of air pollution on asthma has been published, adding to the body of knowledge that has accumulated over several decades. Presently, short-term exposure to ozone, nitrogen dioxide, sulphur dioxide (SO2), PM (particulate matter) 2.5, is thought to increase the risk of exacerbations of asthma symptoms. Increasing amounts of evidence also suggest that long-term exposures to air pollution, can contribute to new-onset asthma in both children and adults. Young children with asthma, are at increased risk of adverse effects from exposures to air pollution.  Improved air quality to prevent exacerbations and new cases of asthma will require strong governmental efforts to move economies in both developed and developing countries away from combustion of fossil fuels.”[1]

According to the Air Quality Permit Notice that was issued by the WVDEP, the Rockwool Ranson plant, if allowed to be built, would spew 296,000 pounds of asthma-inducing sulphur dioxide (SO2) and 268,000 pounds of  particulate matter “PM 2.5” (invisible particles smaller than 2.5 microns) into the air of our community, less than a mile from North Jefferson Elementary.

Specific health concerns about Rockwool’s (then called “Roxul) emissions of “PM 2.5” and sulphur dioxide at its Milton, Ontario, Canada plant were raised in 2007 by Dr. Robert M. Nosal, MD, then Commissioner and Medical Officer of Health for the Halton Region.  In a letter to the Ontario Ministry of the Environment he wrote:

“Overall, health effects caused by exposure to high levels of S02 include breathing problems, respiratory illness, and the worsening of respiratory and cardiovascular disease. People with asthma, chronic lung disease or heart disease are the most sensitive to S02….  The Roxul (Rockwool) facility has a significant impact on air quality in northern Milton. It is currently a significant contributor of air emissions in the community. In addition to further contributing to the air levels of PM 2.5, the expansion of the plant is likely to produce air levels of S02 that exceed the health-based guideline established by the World Health Organization. When the plant’s contribution is added to the estimated background levels of S02 in the community, it is expected that air levels of S02 will exceed the WHO guidelines in Milton about 20% of the time. This is a cause for concern for the Halton Region Health Department.” [2]  Despite these warnings from local health officials, Roxul (now Rockwool) increased its SO2 emissions at the Milton plant by more than 300% between 2007 and 2016.[3] 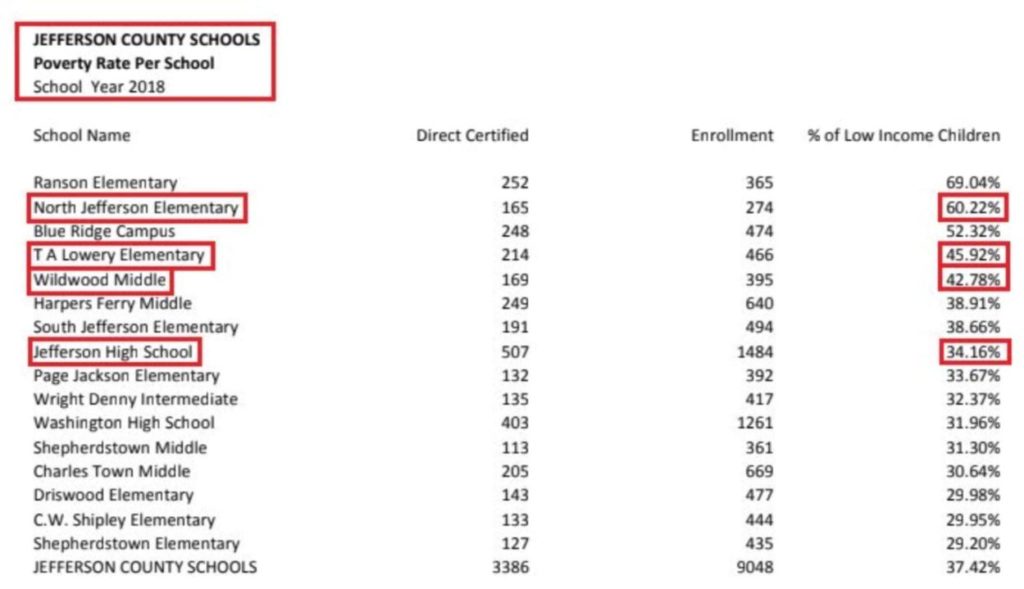 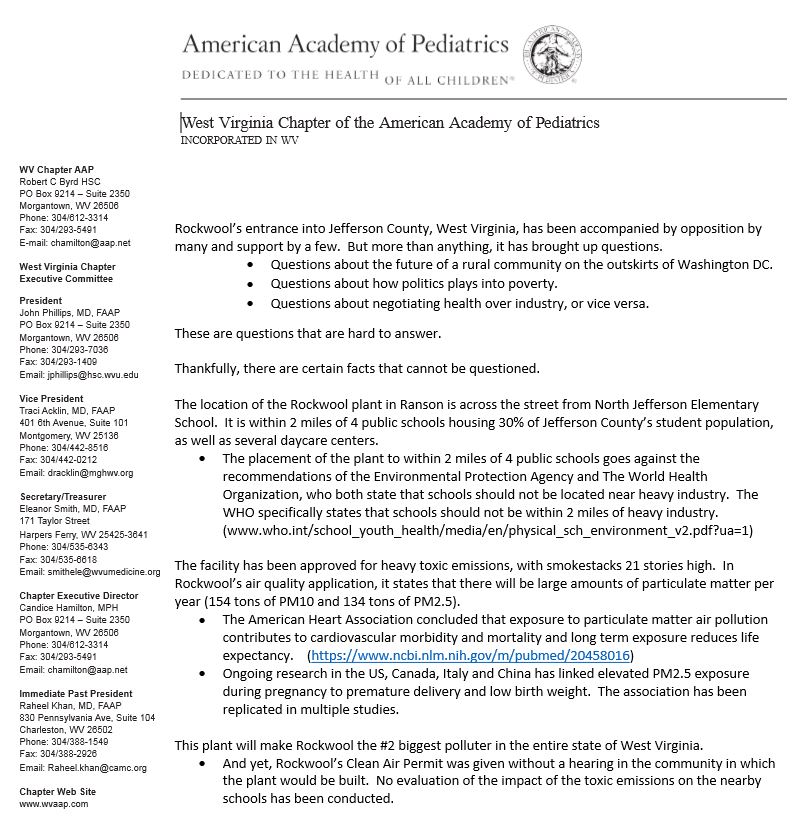 The West Virginia Chapter of NAACP issued a statement calling for a moratorium on site development until health impacts are studied. 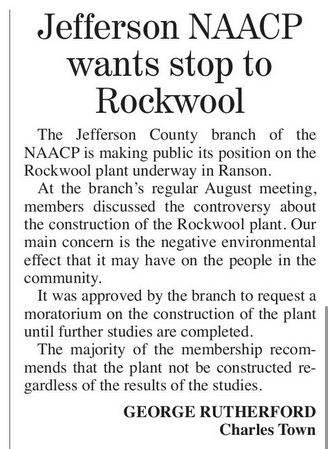