Our Groundwater and Water Supplies 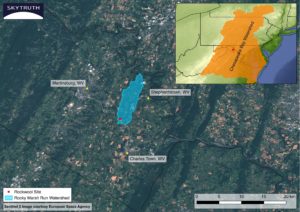 Below, is a review some information about two important sources of water contamination. The first, surface waters, include rivers, streams, and wetlands. Sources are often grouped together inside the boundary of a ‘watershed’, the total land area upslope of a point, such as a lake or river, into which all water will eventually flow. It’s helpful to think of a bathtub. Every location in the world is within a watershed. If you want to visualize your own watershed, please visit the USGS Here. The second source of contamination is groundwater. Groundwater is connected to surface water, but is also connected to other groundwater sources by fractures and faults, and other features.

Water wells and municipal water sources are supplied by both surface and groundwater areas. Each source is important.

For any industrial development at Jefferson Orchards, there are some contamination sources, including: runoff of contaminated orchard soil, accidental spills and leaks of hazardous chemicals, containment ponds whose liners fail (though to our knowledge Rockwool’s plans only include runoff and stormwater ponds), and leaks from above ground storage tanks. According to Rockwool’s published timeline, they expect to submit a Spill Prevention Response Plan and a Spill Prevention, Control and Countermeasure Plan as part of a Multi-sector Stormwater General Permit to the WVDEP. Their current construction activities are authorized under a construction stormwater general permit. See Permit Here The intent of each of these is to safeguard water supplies.

Why is water contamination a special concern in our local case? Others in the CCAR/JCV Facebook group have posted links to studies about the numerous sinkholes in the region. In fact, the area immediately to the Northeast of the Rockwool site contains the highest density of sinkholes in our county. Sinkholes are part of the concern. Think of them as the surface indicators of a larger geological character: our limestone geology means that we have relatively productive groundwater wells, but that these wells are very sensitive to contamination.

The following quote is from a 2012 assessment of groundwater supplies in Jefferson County. Read Here

“Because of its relatively high solubility, the carbonate bedrock in Jefferson County has undergone varying degrees of karstification. Dissolution channels formed within the bedrock of karst terrain can provide conditions for preferential flow pathways, enabling rapid spread of groundwater contamination. Such conditions can have the potential to quickly transport contaminants from surface or near surface conditions to the underlying bedrock aquifer. In most geologic settings, thick soil overburden acts as nature’s water purification system, filtering recharge water as it percolates downward to the water table; but in karst areas this natural filter can sometimes be bypassed by preferential rapid flow paths and drainage features such as sinkholes. Consequently, the carbonate aquifer underlying the Central Unit area is susceptible to groundwater contamination from non-point sources. This susceptibility can be enhanced by surface drainage patterns characteristic of karst aquifer systems. “

I am not a geologist, but the basic story is this: We have sinkholes. We have also have abundant fractures and other features of our geology that make for rapid transmission of surface contaminants to the water table. We lack thick ‘overburden’, a layer of porous stone, sand, gravel, or soil that is on top of bedrock. In other geographic areas, aquifers have more natural protections because water percolates slowly through overburden and permeable rock. No filter plus rapid access means easy contamination.

A USGS study published in 1991 used dye tracer tests to determine rates and directions of ground water flow within the karst aquifer. Dye was injected into a sinkhole in Shenandoah Junction, about a mile from Jefferson Orchards. Two weeks later the same dye was detected at a monitoring point north of Shepherdstown. Within 20 weeks, it was detected at an additional 5 sites between Kearneysville and Shepherdstown. The study reported movement of up to 840 feet per day. Again, this indicates that contamination can happen QUICKLY.

This same USGS study also looked at wells in Jefferson County found that 53 percent contained fecal coliform bacteria and 70 percent with streptococcus bacteria. Wells are easily contaminated and it is hard to know exactly where the contamination originated. In fact, the Rockymarsh Creek Watershed, which flows from Jefferson Orchards to Shepherds town, has an official EPA “TMDL” (pollution budget) on it for coliform bacteria. Again, to me, this indicates that channels exist for easy groundwater contamination. It’s unclear to me at this point in time if the TMDL needs to be addressed officially in any Rockwool permitting.

Rockymarsh Creek is also is a major source for the Shepherdstown water supply (see attached images and link below). Rockwool is not in the “area of critical concern” (which is a 5 hour travel time to the water intake), but it is still within the Shepherstown supply watershed. This is something that Rockwool should have known, but does not seem to. In its stormwater pollution prevention plan, as part of Rockwool’s construction stormwater permit, Rockwool’s environmental contractor, Thrasher Engineering, incorrectly named Shaw Run and Opequon Creek as the receiving waters. Thrasher continued “well head and source water protection areas are unknown”, yet the source water protection area and associated plan is easily found on the wed. View Here  But a web search shouldn’t have been necessary; Thrasher was the author of the Shepherdstown Sourcewater plan.

In addition to thousands of private water wells, there are several municipal water sources nearby, serving thousands of customers and families. These include Morgan, Elmwood and Duffield springs, as well as the source water protection areas for Harpers Ferry, Deerfield Village, and Burr Industrial Park.

We continue to raise questions.

What due diligence have Rockwool and authorities done to minimize the potential for Rockwool’s activities to contaminate our groundwater supplies?

Specifically: How exactly has Rockwool remediated the soil? Who inspected it? What testing has been done in all of the wells to ensure the contaminants weren’t sent into the ground water? Since Rockwool claims to be such a great neighbor, did they collaborate with locals to set up an independent 3rd party tests of the wells? Why hasn’t PSC mapped all of the wells yet?

Rockwool is a threat to our ground water

Water quality threats from Rockwool are also very serious. These maps show the Rockwool site location relative to sinkholes and county streams. Locating a huge plant next to a sinkhole hotspot is just plain nuts from the standpoint of pollutants entering our groundwater, it is also asking for problems with the structural integrity of the plant building and associated sewer lines.

The plant’s location is at the headwaters of many county streams. Groundwater contamination is the real story, a spill or leaking sewer line would be a health and safety nightmare as the material can move underground very rapidly, be difficult to track, and almost impossible to clean up.