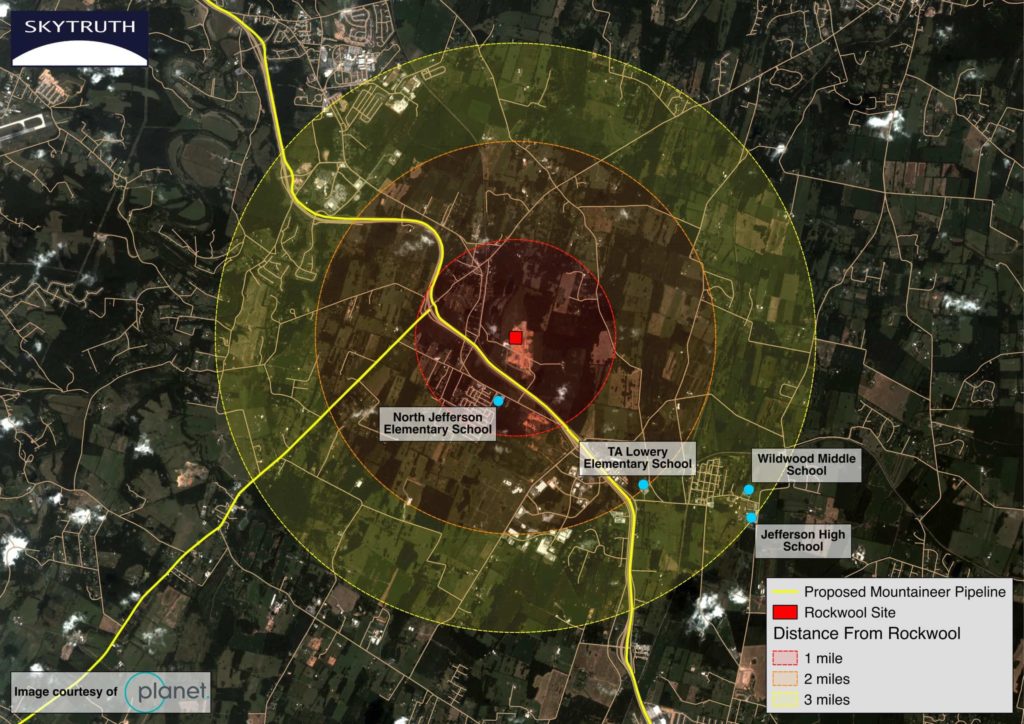 The Environmental Impact of Rockwool on Jefferson County

Rockwool/Roxul, Inc. insists that its air emissions are “safe” because its processes, and predicted operational releases, fall within the EPA’s permissible limits for such emissions. However, over the past four years these regulatory guidelines have been significantly reduced. Now it attempts to claim those emissions are not toxic.

They are using chemicals and extreme heat to melt rock and turn it into a cotton candy like product.  Using only the EPA’s regulatory data, the rock wool manufacturing process is – by regulatory definition:

toxic to humans, animals, and plants

The EPA regulates a variety of chemicals under the Toxic Substances Control Act, 15 USC §1601.  It also must comply with a number of laws requiring classification and disclosure of its processes. 40 CFR Part 372. Within that law there is a section entitled the Toxic Chemical Release Reporting Community Right To Know.  Part D requires the reporting of specific chemicals that the EPA considers toxic, to which the statute applies for each TRI-listed chemical it manufactures, processes or otherwise uses in quantities above the reporting threshold. §372.65

These chemicals are tracked using a specific designated Chemical Abstract Service Register number (CAS).  Included among those chemicals are Ammonia (CAS No.7664-41-7), Formaldehyde (CAS No. 50-00-0), Methanol (CAS No.67-56-1), and Phenol (CAS No.108-95-2).  Companies using toxic chemicals are required to file a Toxic Release Inventory (TRI) report on a regular basis. Although the Rockwool facility in Jefferson County is not even built yet, its “sister” facility in Byhalia, Mississippi is in operation.  A review of its publicly available TRI reports from the Mississippi facility, shows that it must report and has reported the use of each of the above listed toxic chemicals in its operation and manufacture process for rockwool.

In other words, rock wool is produced via a toxic chemical process, i.e., ToxicRockwool.

The 21-story smokestacks are permitted to emit 470 tons of volatile organic compounds (VOC) and 239 tons of nitrogen oxides each year. This will make the Rockwool factory in Jefferson County the second largest VOC polluter and the tenth Hazardous Fine Particulate Matter polluter (PM 2.5) in the state of West Virginia, based on 2014 EPA NEI data. The dramatic increase of toxic emissions and particulate matter air pollution pose a threat to all residents, particularly the most vulnerable-the children, the elderly, and those with compromised respiratory systems.

The increased pollution will impact the natural environment, including the land, agriculture and vegetation. Retired director of the USDA-ARS-Appalachian Fruit Research Station, Kearneysville, WV; David Michael Glenn PhD cites peer reviewed literature that increased ozone levels from Rockwool could reduce crop yields for soybeans by up to 50%, winter wheat by 25% and corn by 10%. Rockwool could harm livestock and cattle, particularly horses, which are 15 times more sensitive to particulate matter pollutants in the air than humans, according to a new study published in the journal of Veterinary Internal Medicine. Pollination by bees, which is critical to local orchards, will be impacted because of the environmental problems and loss of habitat resulting from the construction and operation of the factory

The Corporation of Harpers Ferry at its August 31, 2018 meeting was particularly concerned about what it has identified as a PSSC – “Potential Source for Significant Contamination” to the Harpers Ferry water supply. Elks Run and its tributary the Elk Branch, are the main sources of drinking water for residents of Harpers Ferry, Bolivar, adjacent county customers, and the National Park Service. This watershed area is of critical concern and requires detailed scrutiny due to the proximity of the Rockwool plant to the Harpers Ferry surface water intake and the intake’s susceptibility to potential contaminants.

Water for 80% of Jefferson County residents, businesses and farms is obtained from private wells. The April 2, 2012 report, “County-Wide Groundwater Assessment Jefferson County, West Virginia” states that there are approximately 15,500+ wells in the county. The study also noted that there are areas of Jefferson County that are abundant with groundwater and also that demonstrate robust recharge. The report indicates that groundwater levels are affected by rainfall quantities, temperature and usage. According to Mary T. Sell of the Jefferson County Water Advisory Committee, the document is full of information about the availability of groundwater in the County to help inform decisions on how to best utilize and protect this critical natural resource in our County. The Assessment was prepared for the Jefferson County Commission. Colin Stine, of Elmwood Farm has expressed concerns about the study’s findings. View Colin’s statement about the study here: Colin Stine_Groundwater Assessment Statement.

The location of the Rockwool factory, the sinkholes in Jefferson County and the local hydrology raises the possibility of pollutants entering the groundwater and contaminating wells and springs. A spill or leaking sewer line could result in health and safety issues as the contaminated material moves underground rapidly and is difficult to track and to clean up. According to maps by D.H. and K. Doctor in “Carbonates and Evaporates”, June 2012, Vol 27, Issue 2, the highest concentration of sinkholes in Jefferson County is located adjacent to the proposed Rockwool site. The factory site is also located at the headwaters of a number of County streams.

In the 1990s, a county study injected dye into a well near Bardane in the Elk Run watershed and within less than two weeks the dye was also found in Rocky Marsh Spring, which feeds Rocky March Run, almost 8 miles away. The dye also found its way to the Morgan Spring, which feeds the Town Run, Elmwood Spring, which feeds Rattlesnake Run and the Duffield Spring- Elk Branch. The dye moved rapidly underground over a large landscape and took 25 weeks to clear from all locations. (Kozar, M. D., et al., 1990. Geohydrology, Water Availability, and Water Quality of Jefferson County, West Virginia, with Emphasis on the Carbonate Area. U.S. Geological Survey, Water-Resources Report 90-4118). 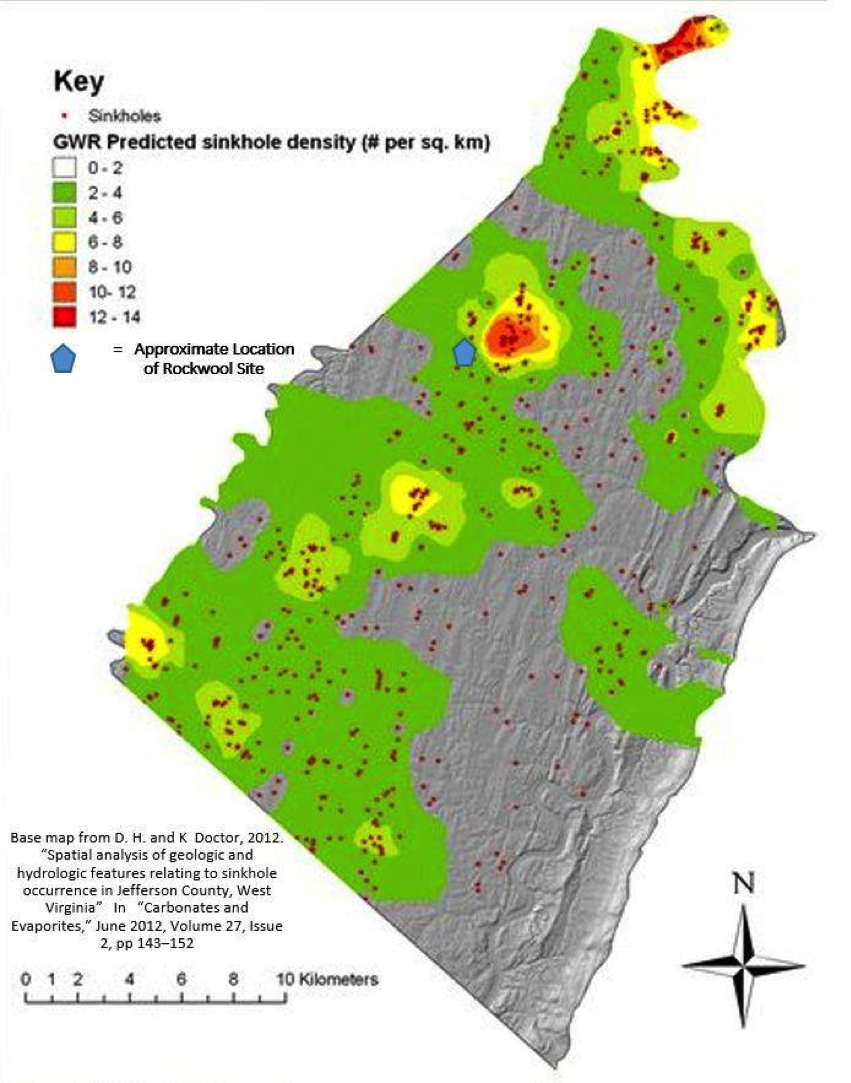 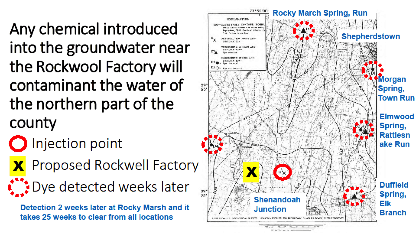 Rockwool proposes to withdraw 125 thousand gallons of water per day initially and then up to 500 thousand gallons of water per day. The internal underground drainage systems in karst areas are very sensitive to extraction. Removing this quantity of water from the aquifers can have very serious and unpredictable adverse consequences. Lowering of water tables can affect the hydrologic equilibrium of local streams as well as wetlands, including rare marl marshes, at substantial distances from the point of extraction. The potential impact is loss of critical wetland and riparian habitat for threatened and endangered species of plants and other forms of wildlife. 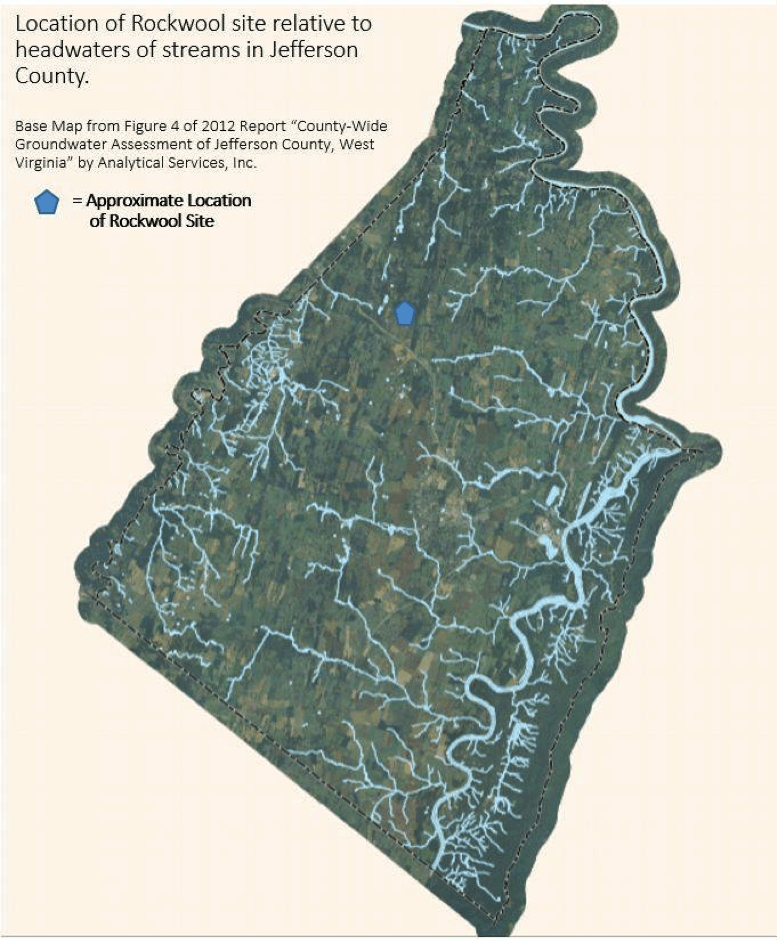 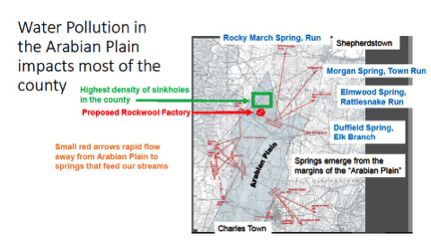 The factory will operate twenty four hours a day, every day of the year. It will create increased noise and light pollution for the residents, schools and businesses located within sight and hearing distance from the factory. The large number of heavy duty trucks, some carrying loads of coal, stone, and potentially natural gas, entering and leaving the factory twenty four hours a day, will also dramatically increase noise pollution for local residents.

The Rockwool factory is located in close proximity to eleven structures listed or eligible for the National Register of Historic Place, according to the Jefferson County Historic Landmark Commission. The sight of the two 213 foot high smoke stacks, their lights and the emissions coming from them will negatively impact the views to and from local historic battlefields of Antietam and Shepherdstown, Harpers Ferry National Park, the Appalachian Trail as well as views of the first ridge of the Blue Ridge Mountains.

The smoke stacks will be visible from every corner Jefferson County, including public lands and properties in conservation easement, many funded by the American Battlefield Protection Program. 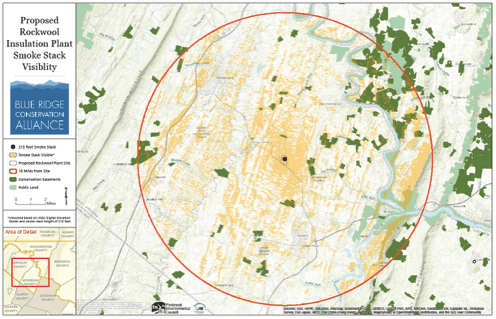 In Jefferson County twenty-seven rare species live in the marl marshes. There is also one federally-listed Threatened Species: the Madison Cave Isopod, a small crustacean that lives in groundwater and has been documented in three locations, including two sites near the Rockwool factory. The WVDNR identifies several “High Quality and State Mussel Streams” including Evitts Run, Bullskin Run, Elks Run, and Long Marsh Run. The USFWS and the WVDNR also maintain lists of species of concern which includes the Baltimore Checker spot butterfly and Sedge Wren.

Jefferson County is positioned on the Atlantic Flyway and immediately to the east of the Allegheny Front. Many migrating birds take advantage of the winds from the mountains and ridges of the Appalachian range to mitigate the challenges to their biennial long-distance flights. Migratory birds are protected under the Migratory Bird Treaty Act, which not only protects the birds themselves but also sets stipulations to protect habitats necessary for the birds’ survival. According to Suzanne Offutt, Board President of the Potomac Valley Audubon Society air emissions from the Rockwool factory, especially particulate matter, will create hazards to migrating birds using the Atlantic Flyway.